In order to celebrate the publishing of the book The wisdom behind emotion and feeling, author Wendy van Mieghem interviewed all of the professionals that were part of the creation process. All of them were reluctant to participate. Yet they conquered their fears and they were interviewed, on tape (!), summer 2018.

Below you find the full interview with illustrator Roos ten Broecke, both text and 2 videos. A recap of this interview can be found on Kickstarter as well. Enjoy!

Thank you so much for having this interview with me, Roos. I know it is totally out of your comfort zone, so I really appreciate your efforts. How are things going in Belgium, Antwerp?

Really? O, thatâs good to hear. Perhaps itâs good to start with telling the readers that I was looking for an illustrator for over 2 years already âtill I found you. I saw illustrations of you when I was scrolling through my timeline on Facebook. Your mother had posted them.

I immediately felt that your illustrations would be able to touch peopleâs hearts and to help them melt or crumble some of the walls theyâve build up around them. So I reached out to your mother and asked her if I could contact you to see if you would be interested in making illustrations for me. And you were.

Yes, thatâs how we met. I was very happy that you asked me. It was an honor for me to work with you.

So it was a win-win situation.

O, thatâs good to hear. The first thing I would like to ask you is: do you make a living out of making illustrations?

No, making illustrations is not my main professional activity. I also work as a mediator: a social worker for people who have difficulties finding a job. Besides, I try to find as many illustration opportunities as I possibly can.

And do you have certain routines when you make illustrations? For example, when you drew the ones for the book?

I donât really have routines. Usually, I just jump in whenever I have the time. I remember, when I was working for your book, I spent a lot of time outside. It was during spring and summer of 2016 and it was wonderful weather. So I remember I drew a lot of the illustration for your book in the garden, with a cup of coffee.

I do make drafts usually. Just to get an idea of what is needed. I do it quickly. Once the scale and everything is in place, I start to work on the final illustration.

And do you illustrate on paper, or on the computer?

On the computer. I have a drawing pad and a program for it. When I draw on the pad that lies on the desk, the illustrations I draw show on the computer screen.

And what inspires you Roos, when you illustrate?

I like to say that the little things in life inspire me. Things that are sometimes too simple to see. It is always nice to give them a visual being. In the collaboration with you, what I found really inspiring was that at times you knew very well what you wanted. So you would be very specific, for example a certain emotion with an owl and some grass.

But there were also times that you had a certain feeling that you wanted visualized. And I also found this very inspiring, to just start with that and see where it took us. Sometimes it took a few turns before it felt right and it would end up in the book. And at other times it came very easy and quickly.

Yeah, I recognize that. I was, and still am, very impressed with all of your illustrations. Sometimes it took 3 or 4 versions before it was the right version to fit the book. Other times you just took me by surprise. It was in one go and spot on. You touched exactly the right angle or the right atmosphere.

I was working on the book for over 8 years already. During the last year/half year that we started to collaborate very close in a way. So I would send you text, and you would send me illustrations. Sometimes I was already thinking of a subject and a had some sort of vage definition of what I was looking for. And I received an illustration back from you that touched me in the core of my heart. Sometimes I really cried when I opened up my mailbox and saw an illustration of you.

Your illustrations really inspired and encouraged me to continue to write. Because after 8 years, at times I had so much doubt, self doubt, whether I would be able to complete this project at all. So you inspired me as well.

Your writing inspired me in return. So it was an inspiring circle.

Yeah. Thatâs wonderful. So now itâs July 2018 and back then, it was spring/summer 2016. So itâs been 2 years already. When I look back, it was hard work, but it was also a wonderful time.

So now the English translation of the book is about to be published and on its way to enter the world. Whatâs it like for you Roos that your illustrations will soon be visible to the entire world?

Well, itâs wonderful. And itâs scary as well, I think. Because Iâve never been so exposed in a way. So itâs still a bit new to me. But itâs nice to hear that it still touches people. And that it contributes to the story you want to tell and get out there. So itâs nice that it keeps going and that it receives new exposure, I think.

The book received in the Netherlands so many positive reviews. Some people, a small percentage, thought the illustrations are too childish. However, most of the people were really moved by your illustrations.

The book invites people to turn their attention inwards and get to know themselves and their humanity better. I hope the book will be able to support and inspire them in dealing with emotions and pain. That it can help to build inner trust and compassion for themselves and others. And that it makes their lives lighter.

The book can be confrontational at times. Thatâs why I was looking for illustrations that can make you feel open, welcomed, reassured. Making you feel safe, whatever the situation youâre in. And you really pulled that off, Roos. Iâm still so thankful I found you.

Well, for me too. I think it is a wonderful example of how a collaboration can work out well for the message you want to bring.

What was the book The wisdom behind emotion and feeling like for you? Did it touch you personally?

Yes, of course. I was used to reading small parts of the book, related to the illustrations I needed to make. But I remember this one illustration that I made, with the bridge between two pieces of land, representing the conditional and unconditional aspects of life. I found that part of the book very inspiring. It is very true. And at that time, it was useful for me. However, it wasnât the easiest illustration to make. Making the illustration helped me understand what the chapter was about. It is my favorite. 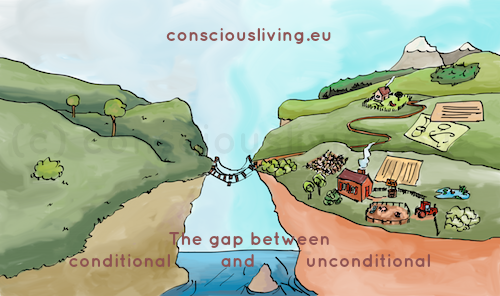 OK, so the gap between conditional and unconditional, and the interaction between them, is your favorite part of the book?

Yes, I think so. Because I think it is very useful and very true in life. But it is not something that you think about by yourself. It is something that you can feel and recognize but it is hard to put it into words. The chapter, and the book entirely, does that wonderfully. Things that are not easy to name or to talk about, you make them talkable.

O, thank you Roos. Thatâs a wonderful compliment. Iâm happy to be of service. OK, well. Do you have a question for me Roos? Is there anything left unsaid that can be interesting?

Ehm, well, maybe it is interesting to know, now the book will be published, is the actual version of the book that is being published anything like you had in mind before? Does it fulfill the longing you had when you started working on the book?

Yes, it does. I think it is exceeding my expectations in a way, both positively and negatively. Because it took way more time and work and effort, and also more inner work and attunement, than I anticipated in order to be able to complete the book. It also made me move through very deep layers of pain and intense emotions.

It is good that I didnât know it would take that much skill and effort. Yet, the reward is utterly beautiful. The fact that I gave myself the space and the time to unfold this process, is a huge gift. Time to find the right words, because I also find it hard to find words! It is one of the reasons why it took 9 years to write the book.

Being able to express what felt right and true to me, and to put it into words and to make it beautiful, with a beautiful design, and beautiful illustrations, and with the editor, and to lift it to the highest level I possibly could with the resources and connections I had. Yes, it still gives so much satisfaction and such a deep fulfillment and contentment. And thatâs regardless how many people read it.

Of course when people read it and it feeds them, that also gives a lot of satisfaction, but in a different way. So yes, it really does give a lot of fulfillment. Sometimes I say to people: “Well, it took a lot of time, and effort, and money. But I can die peacefully now. I hope I will still live for a long time, but if it is necessary, I can die peacefully. Thatâs how deep the satisfaction is.”

Thatâs wonderful to say about something youâve done.

Thank you so much for having this interview with me. Thank you for sharing your heart and efforts and devotion with the readers and me.

Interview with illustrator Roos ten Broecke about the book ‘The wisdom behind emotion and feeling‘ by Wendy van Mieghem – consciousliving.eu

This site uses Akismet to reduce spam. Learn how your comment data is processed.